Well, I finally saw "Prometheus". I dutifully paid the exorbitant ticket price, put on the uncomfortable 3-D glasses...and came out knowing for sure what I have long suspected: if you like SF, seek it in books, video games, graphic novels or your friends' blogposts. Leave movies alone.

In 1979, "Alien" made history. The sequel "Aliens" was, from my point of view, even better. The third movie was foregttable but I loved the fourth one. I have to confess I did not watch the Alien versus Predator franchise. 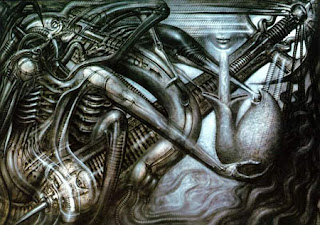 "Alien" had it all: a tense plot, stunningly innovative visuals (designed by the renown surrealist artist Hans Giger), serious thematic concerns (mostly having to do with gender and definition of humanity), and that cool, distancing, emotionless affect, which is one of the main reasons I love SF. "Estrangement", to use the technical phrase: making strange, making different, making one think, contemplate and wonder. There are enough soppy "human interest" stories overflowing the trash-cans of daytime TV, if this is what you need. Give me one genre that appeals to the human mind and imagination rather than jerking at our tear glands.

And here, 30 years later, is "Prometheus". It is supposed to solve the mystery of the Alien series: the origin of the aliens themselves. It only solves it in the sense that by the end of the movie you no longer care. It piles one preposterous idea upon another, bringing in a little creationism, a little "spirituality", and a little love story, with the female lead who is to Sigourney Weaver as Kim Kardashian is to Marlene Dietrich. The sly creationist hints in the movie set my teeth on edge. Make a straight religious SF if you want; there are many precedents for this. But "Prometheus" tries to have its cake and to eat it, to be "spiritual" and to be scientific at the same time and ends in a sorry little puddle of compromise.

And the entire movie, despite the millions that were undoubtedly spent on its production, has the same shabby, sly, second-hand feel. The best parts of it seem recycled; the worst - reconstituted. The tag-line, "We want to meet our makers", is borrowed from "Blade Runner" where theological echoes are used to great philosophical and cinematic effect. But in "Prometheus", the only conclusion I could draw was that humanity's makers are too embarrassed by their failure in creating an intelligent species to want to meet their botched product.

As for the so-called New Age-y "search for meaning" that "Prometheus" is trying to drag in, the only good scene in the movie occurs when David the android asks another crew member why humanity has created his kind. The answer is: "Because we could". This would be God's answer too. No need for interstellar travel to find this out; just read the Book of Job.
Posted by Unknown at 9:54 PM